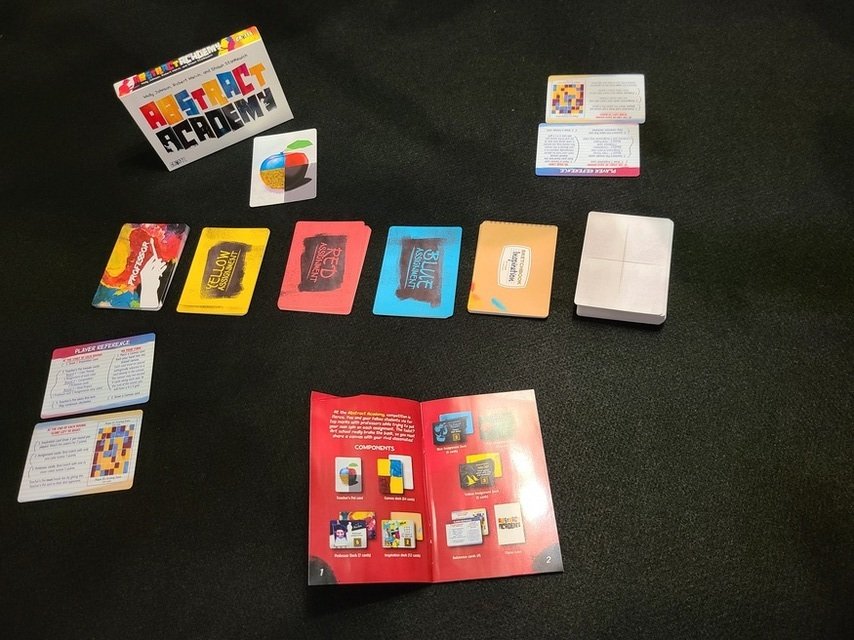 I’d like to thank Crafty Games for sending along a copy of their game for a review. I always enjoy spatial puzzle games and was excited to check this one out. It’s from the designers of Dollars to Donuts, Verdant, and Point Salad so I was intrigued to see what they’d have for us in this small box addition to their collection.

At the Abstract Academy, competition is fierce. You and your fellow art students vie for top marks with professors while trying to put your own spin on each assignment. The twist? Art school really broke the bank, so you must share a canvas with your rival classmates!

Abstract Academy is played over three rounds by either two or four players, with the players a new canvas each round. At the start of the game, you lay out 2-3 scoring cards for each round, so you all know what you’re trying to achieve to score. Additionally, at the start of each round, each player receives an inspiration card that shows a pattern they’re trying to create on the canvas.

In the two-player game, players take turns playing canvas cards into a shared 4×4 play area, and in the four-player game, they play in a shared 5×5 area. Canvas cards are divided into quadrants, and each quadrant is colored yellow, red, or blue. The canvas grows organically as you all play cards, and the edges aren’t fixed until you have four (or five) cards in a row or column. The edge of the canvas closest to you is your home row, and once the canvas is locked in size, no one else can play in your home row (unless all other spaces are filled).

Once the canvas is filled, the two rows closest to you form your scoring zone. If the color patterns in your zone complete a scoring card better than the patterns in anyone else’s zone, then you claim the scoring card. Additionally, if you’ve created the right pattern in your scoring zone, you can score your inspiration card. Whoever has the most points after three rounds is the star pupil of Abstract Academy and wins!

Disclaimer: The publisher provided the copy of Abstract Academy. The opinions expressed in the review are completely my own. 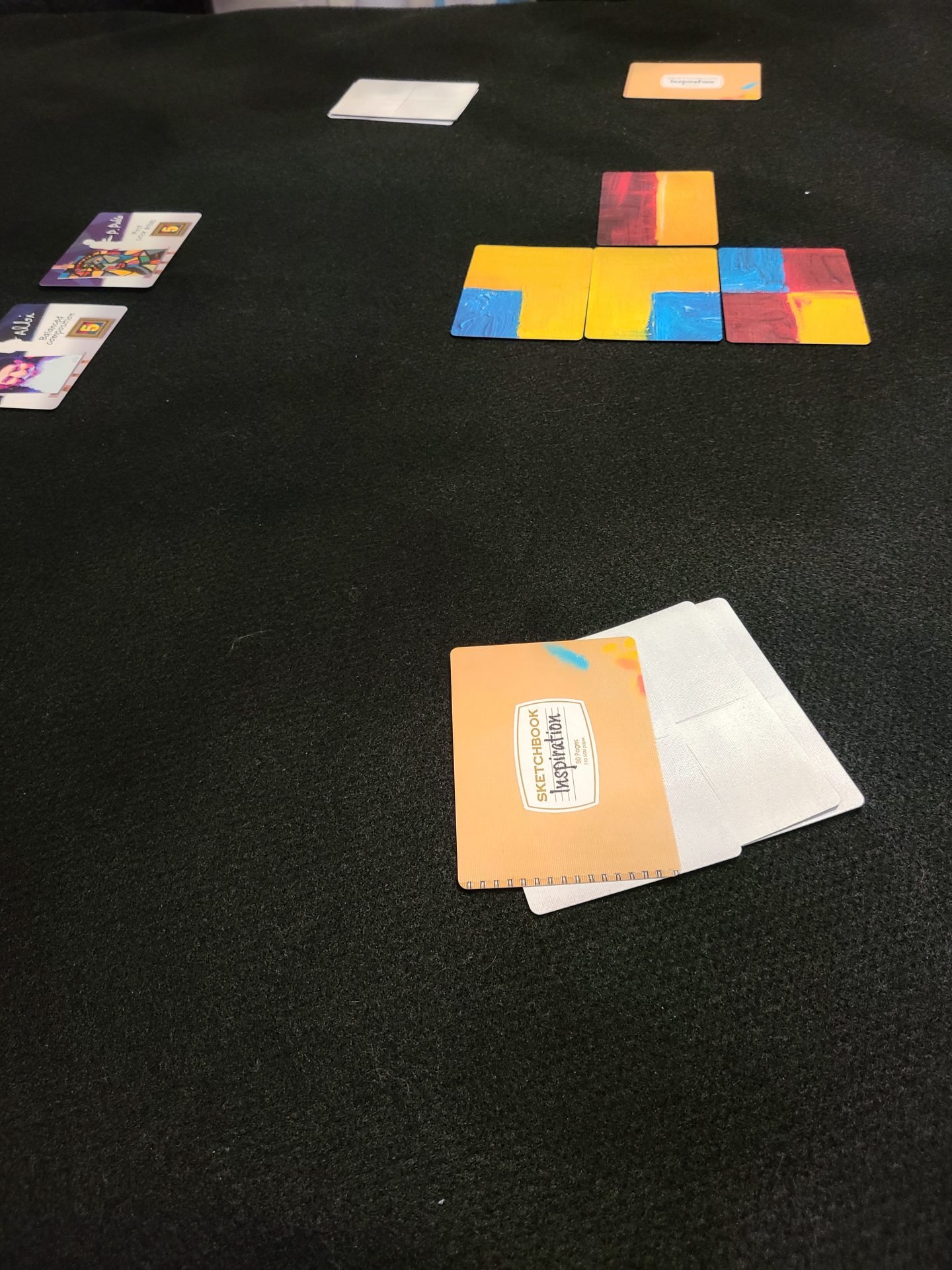 Upon opening the game, I noted right away that they had fit a lot in this box. I’d use the term maximum capacity. The conservationist in me will give them points for minimizing waste and also succeeding in keeping the cost of the game down. That said, you do sacrifice some comfort here by not having a slightly larger box such as a double deck box or extra small telescope. The cards themselves appear to be a nice, medium weight, white core with a linen finish. I like the feel and overall look of the multiple types of cards and their warm colors.

This is a published game that at the time of this review was listed for $9.95 on the Crafty Games website.

My favorite thing about the game has to be the floating 4×4 card layout / play area. Players take turns laying cards orthogonally and push out towards the 4-card limit in either direction. Once a 4th card is laid in a line (row or column) that axis is locked. Where you only score using the two closest rows to you, this mechanic gave the most agency to the player when developing their strategy.

I’ve got to say, I think this game is a bit unbalanced. The point system and associated difficulties never seemed to fit to what I felt they should be. Your private goal (inspiration) could be easy or very hard to achieve based on what your shape was and they were all worth 2. The group color-specific assignments were about where they should be at 3 a piece. The professor cards were worth 5 and gave too much reward for what they were. In the 5 games I played, the player who got the most professor cards (even if just by one) won every time. I won a game achieving no inspiration points while my opponent had all 3 rounds worth. I felt they had played a better game and I had won anyways – to be fair we both still enjoyed the game.

On the whole, this is a tidy little game that you can easily break out and teach to a friend in the posted expected timeframe of 30 minutes. My first play of this game, me and a friend opened, learned the rules, and played the whole thing in 28mins, and 42secs.

The fact that I got this to the table, played it without a hitch and felt overall well about the whole experience is enough for me to go ahead and recommend this one. I think this is a good choice for new gamers, people that enjoy light/quick games, for family game nights, or as a start/end to a group event.

After reading Brad’s review, if this sounds like a game for you at the time of this posting Abstract Academy is available for purchase. Check it out and pick up your copy HERE.
Find out more at BGG.

Did you get a copy based on our review? Please comment below letting us know!

Check out Abstract Academy and Crafty Games on: