The Budapest Gambit is named so due to its usage (and success) by Hungarian players around 1917.The first recorded game was Adler vs Geza Maroczy in 1896, Budapest

2…e5 is an odd-looking move at first, and players unacquainted with this gambit may pause to try to figure out why Black would play such a strange move. If playing online, it would not be wrong to assume Black had meant to play 2…e6 and had a mouse slip.

Black seeks to immediately complicate the game by disrupting the positional balance, striking directly at White’s pawn structure. Black wants to create tactical problems for White. White generally only has problems when outright trying to refute the gambit and especially if they try to hang onto the extra pawn.

If White ignores Black’s gambit and develops normally, the game evens out and White oftentimes has a slight positional advantage.

Is the Budapest Gambit sound?

All things considered, for being a gambit, the Budapest Gambit is pretty sound. With perfect play, White has a slightly better position. After 3.dxe5, Stockfish 14 gives White a +0.8 advantage, ie less than one pawn. Compare this to the Ruy Lopez (1.e4 e5 2.Nf3 Nc6 3.Bb5), which gives White a +0.2 advantage.

At the Super-GM level, it is probably unsound to play; but practically speaking, it is perfectly playable for any players below GM/IM level.

Is the Budapest Gambit Playable by beginners?

True beginners learning the rules and basics would do best by sticking to these 10 chess openings for beginners.

However, if you have a bit of experience under your belt and would like to experiment with gambits, the Budapest Gambit could be a good first choice for beginners. There is not a whole lot to memorize, and the ideas are pretty simple. Plus, many of your opponents are likely to have never seen this gambit before, so if your opponent does not play it correctly, it could result in some nice wins for you.

Another excellent option for your first gambit is the Stafford Gambit.

How to play the Budapest Gambit as Black

Like all gambits, the fundamental idea behind the Budapest Gambit is to focus on quick development by offering material, in this case the e5 pawn.

The ideal scenario for Black is one where White will waste tempi in trying to keep this pawn. The quick initiative gained will make White quite passive.

All mainlines of the Budapest Gambit revolve around White capturing the pawn with 3.dxe5. In fact, 81% of games feature this move.

If White chooses to not accept the gambit, eg 3.d5 Bc5, Black is ahead in development and already has a strong grip on the dark squares. 3…Bb4+ is also a good move. If Black already has a choice of two strong moves as early as move three then White has clearly done something wrong.

3.Nf3 e4 and Black attacks the knight and gains space. 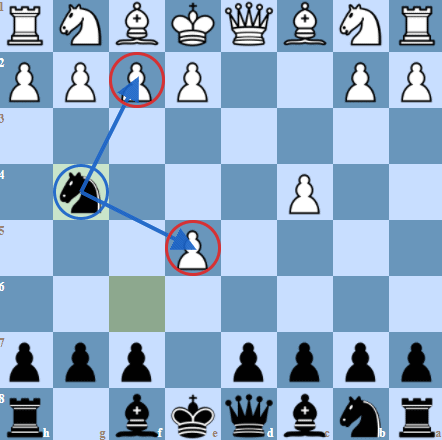 It might look a little weird, but you’ll see that this move directly targets f2 and threatens to recapture the pawn on e5. Nothing is too majorly threatening for White though. If, for example, Bc5 is easily dealt with with e3.

However, White must now decide if they will try to keep the pawn.

If White allows the recapture with Nxe5, Black has posted their kingside knight to a nice central square.

Black wants White to try to hold on though. What ways does White have at their disposal to do this?

Black can then turn the opening into a true gambit with 4 …d6, after which the minor pieces will become very active and cause problems for the White queen.

4.f4, the most direct and radical attempt at defending the pawn on e5 is not so sound. This is just what Black is hoping for. White now has a worse pawn structure. After 4…Bc5 5.Nc3 (or e3) d6, it’s pretty obvious that Black has enough compensation for the pawn with superior development.

This is probably White’s most reasonable way to try to hold onto the pawn (at least temporarily). White develops a piece in doing so.

From this position, we enter into the trap every Budapest player is hoping for. 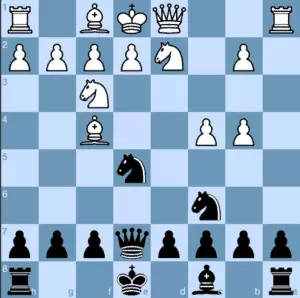 Black has some really nice coordination. Their light-squared bishop is on the long diagonal, while their a-rook may be placed behind the queen on e8. However, White has a real space advantage on the queenside and has the bishop pair. 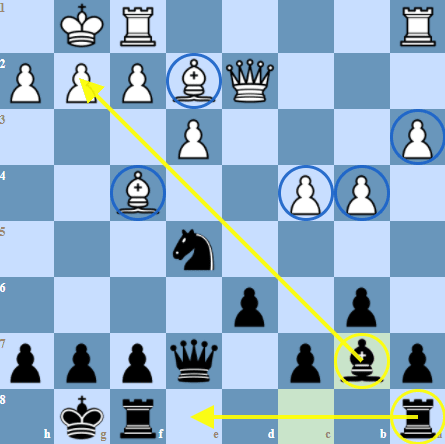 Going back a bit, note that if after 5…Bb4+ White blocks with 6.Nc6, …Bxc6 can saddle White with doubled paws on the c-file. Nothing that White can’t handle, but that could be annoying later on in the game and give Black a target.

The less sound, less popular and sharper Fajarowicz Gambit deserves a mention as a sideline. Black’s not really after getting the pawn back.Rather, they want to unsettle White. If White doesn’t know what to do, it can very well work too. 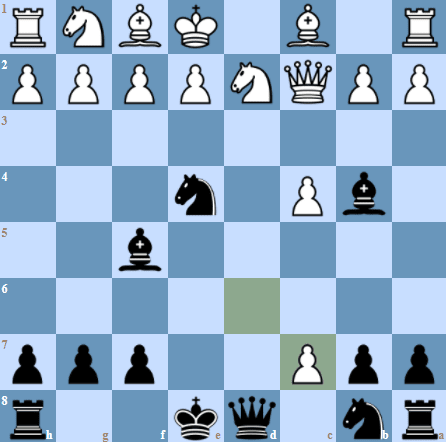 An incredibly sharp position where White is hardly developed, and Black’s threats are numerous. Brutal. 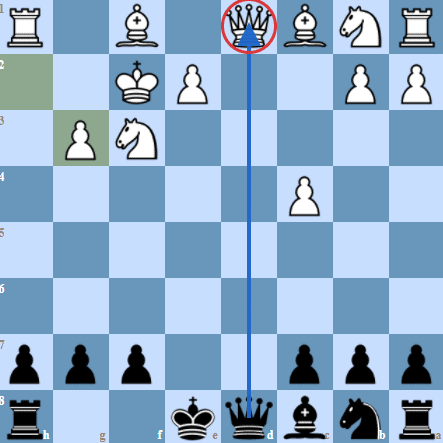 How White can counter the Budapest Gambit

If you are so averse to the Budapest Gambit that you would like to never face it, you can simply play 2.Nf3. This flexible move will prevent White from going 2…e5 and allows you to transpose into mainline d4 stuff by delaying c4.

Let’s say though that it doesn’t bother you so much. As mentioned earlier, trying to hold onto the extra pawn is what Black wants. Therefore letting Black take the pawn back gives White the best chances for counterplay.

In response to the mainline 3…Ng4 There are two main responses for White, 4.e4 and 4.Nf3.

The first is a sharp reply. After 4…Nxe5, white continues with 5.f4, a direct strike on the knight, with three pawns and no pieces out. It’s bold, and after 5…Nec6 (or Ng6), the risk it entails is that it remains unclear so early on White’s broad center will be a weakness or a strength, and their kingside has been weakened. 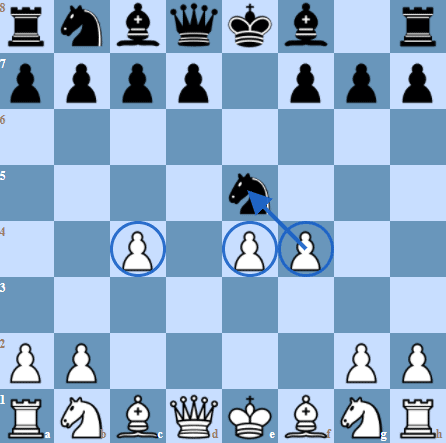 4.Nf3 is the most principled approach, and the one recommended by engines (although 4.Bf4 is actually played just slightly more!). 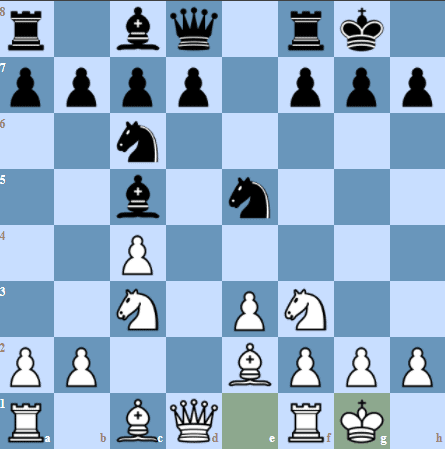 The Budapest Gambit is a solid gambit that is quite easy to learn. Since it is played on move two, the probability of your opponent lets you play it is high. Black will have their best chances if White tries to hold onto the pawn, but even if White does not, Black wins the pawn back and will have a nearly equalized position.

How do you play the Budapest Gambit?

The Budapest Gambit is played by offering a pawn on move two after the following sequence of moves: 1.d4 Nf6 2.c4 e5.

Is the Budapest Gambit bad?

Not at all. Though not played much at the highest levels, the Budapest Gambit is a reputable and solid opening.

How do you beat the Budapest Gambit?

White has their best chances to beat the gambit if they do not try to hold onto the pawn long term and focus on development.

Is Budapest Gambit a good opening?

The Budapest Gambit is a good opening. A pawn is offered at the beginning, it is often though recovered, leading to an equal position, and if it is not recovered, Black usually has a lead in development and attacking chances.

Why is it called Budapest Gambit?

Despite actually having been played in Budapest for the first time in 1896, the Budapest Gambit received its name from Hungarian players that played it around 1917.