Chess puzzles are one of the key elements which most players use to improve their games.

To simply define what chess puzzles are, these are preset positions where you have to find a solution.

The solution while they have categories, mostly finds you either gaining material or delivering a checkmate.

The extent of how puzzles improve your chess isn’t measured yet. But a player like GM Ray Robson has stated that studying puzzles has positively impacted his game.

Chess puzzles are categorized as phases and tactical motifs. We will look at each category in detail and what to expect.

The puzzles below will also be placed into 3 groupsnamely easy, mediumand hard.

Easy puzzles are primarily focused on building beginnersplayers who have just started learning chess or players who are still in the 1200 Elo’s cap.

Medium Puzzles focus on the majority of chess club players. These are 1200+ to around 2100 Elo.

Hard Puzzles can be taken by 1900+ players. While most elite players can be able to easily solve some of These chess puzzles, some can be a bit tricky.

A chess game has a total of 3 phases, namely:

The endgame primarily focuses on checkmates as it is the last stage of the game.

This is the first stage of a chess game. Both players aim to develop their minor pieces, castle for king safety and fight for the center.

In this position, White forgot their king’s safety and also to improve their minor pieces into favorable positions.

This has left the black queen with the opportunity to play 1…Qa5+, forking the king and bishop.

Meaning protect the king and lose the bishop as there is no way to save both.

In the video lesson below, FM Marko Makaj explains everything you need to know about chess openings. The video is for a beginner playerand in it, you can understand the importance of development and the center: 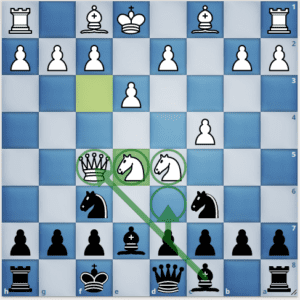 A typical error that occurs with club players is that they tend to overstretch their attacks.

In the position above, White believes they have Black on the backfoot since the king cannot castle anymore.

1.Nxe5 rather makes White’s queen and the two knights vulnerable to counterattacks and threats.

1…d6: Here Black threatens the knight on e5 using the pawn. The other threat is that the bishop on e8 is attacking the queen on f5.

White will lose the knight no matter what… The best continuation will be 2. Nxc6 bxc6. Now the queen has to evade the bishop’s threat as the pawn on c6 prepares to capture the knight on d5 afterwards. 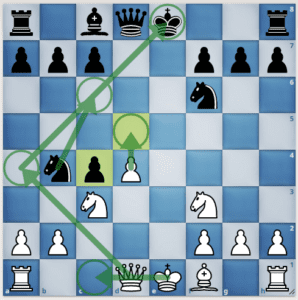 Instead of ensuring king safetyBlack mistimes when they should start focusing on the center by playing 1…dxc4.

This gives White the opportunity to launch attackswhile also creates a defense barrier for the king.

2.Qa4+. This launches an attack on the knight on b4 and the king on e8. 2…Nc6. This move finds Black trying to protect both the king and the knight.

3.d5. This finds White manipulating the absolute pin on the knight. 3…Nxd5. In this position, Black thinks that they can be able to save the position, But white simply plays 4.0-0-0.

This finds the rook delivering a relative pin on the knight on d5 and the queen on d8.

The position will be crushing for Black due to the multiple pins and threats in the position.

This stage occurs just after the opening rules have been followed. It mostly finds players putting their pieces in favorable positions.

For properly learning how to play on this stage, look at How to Play the Middlegame (The Ultimate Beginner’s Guide). 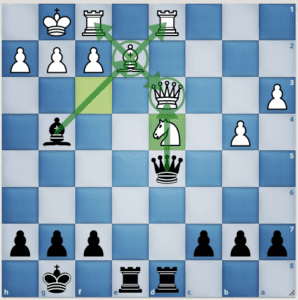 This capture is causing a positional collapse for White as it gives Black multiple threatening chances.

Any other moves from White still find the position failing. 1…Bxe2 2.Qd2 Bxd1 3.Rxd1Qxd4then there is nothing that White can do. 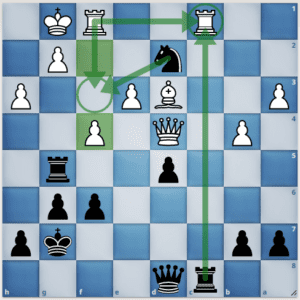 White thinks they can threaten the rook on g5 with their pawn. This is actually a blunder as it allows Black to do multiple attacks.

Or 1…Rxc1 2.fxg5 Nxf1. But in both situations, there is nothing that White can do to stop the position from collapsing. 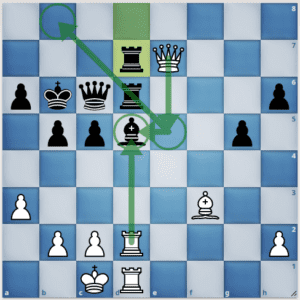 There are too many threats in the position that Black is facing, and 1…R8d7 seems to be a move that can alleviate the pressure by counter threatening the white queen.

This though doesn’t work as it allows the queen to play 2.Qe5meaning Black will lose material no matter what.

If Black decides to counter threat the queen again by playing 2…Re6then there is 3.Qb8+ Rb7 4.Qd8+and the position will be lost due to the multiple threats, which include the bishop on f3 attacking the d5-bishop.

This is the final stage of a chess game, and it arrives after the middlegame.

As to when this stage comes into effect, there is no certainty. But it is noticeable due to the kings becoming more active in the game.

To play properly the endgame, watch the video lesson where GM Igor Smirnov teaches you the 3 most important endgame principles that every chess player must know. 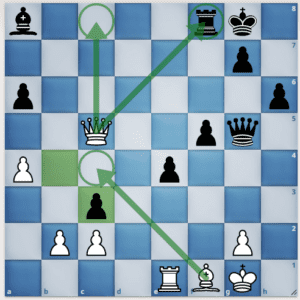 In this position, Black doesn’t see any way in which the position can collapse.

After the move 1…c3White has been given a chance to take advantage of the position.

2.Bc4+: White has made a threat on the black kingleaving the rook on f8. 2…Kh7and the rook gets captured immediately.

If 2…Rf7then there is 3.Qc8+ Kh7 4.Bxf7and there is a threat on the bishop on a8 and a mating threat on g8with both threats coming from the white queen. 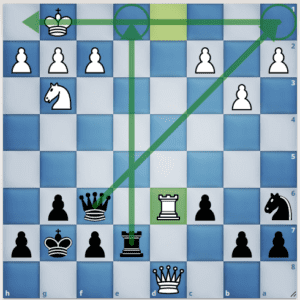 In this position, White thinks that they can possibly continue making threats and, at some point, Black will blunder.

But by doing this, Black has the opportunity to attack by manipulating the back rank.

1…Re1+ 2.Nf1: In this position, Nf1 is unavoidable as the king is stuck in the back rank with no possible way of escaping the attack besides blocking it.

2…Qa1. And White will have to find a way for the king to escape, but there is no way to protect the knight from being captured.

There is also no way that the white pieces can attack the black queen as the crucial f7-square is still protected by the queen on a1. 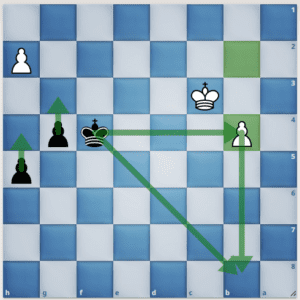 This position is totally winning for Black, but theoretical knowledge has to be applied in order to do so.

1…h4. There is no way for White to stop the black pawn from promoting, so the best option is to see if Black can blunder by playing 2.b5.

In chess, there are multiple tactics. With a tactical motif being a series of moves that lead to a certain goal.

These goals range from checkmatecausing a collapse in the positionor even saving the game by finding a stellating sequence.

A fork occurs when a piece is attacking two enemy pieces at the same time. 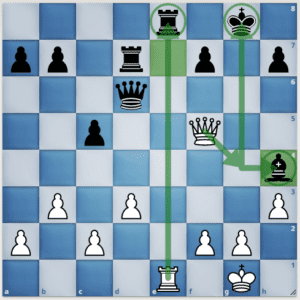 In this position, White can perform a fork after 2.Re8+ Kg7 3.Qg4+and the queen is forking the black king and black bishop.

Black is also forced to either play 3…Kf6 or 3…Kh6 going into another check after 4.Qxh4.

A sacrifice occurs when a player temporarily gives up material with the sequence of moves that will follow, leaving the players with an advantage.

The long-term advantage could be material-based, positional-basedor even delivering a checkmate. 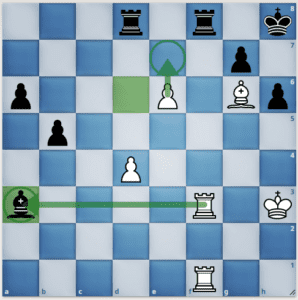 In this position, White is well aware of the capabilities of the e7-pawn. The main enemy piece that’s limiting the pawns capabilities is the bishop on a3.

So, to make sure there is some progress, White decides to play 2.Rxa3, temporarily sacrificing the rook on f1 after 2…Rxf1.

The sacrifice pays off after 3.e7meaning Black will have to sacrifice a rook for the pawn that will promote.

A double-check occurs when two pieces are attacking the enemy king simultaneously.

Normally, for this to occur, a piece has to be moved into an attacking positionalso revealing another attacking piece that was being covered. 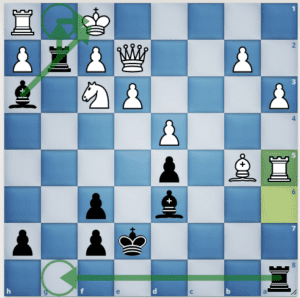 In this position, White focuses on winning material rather than ensuring their king’s safety.

This has given Black an opportunity to create a mating net by playing 1…Rg1+.

This is considered to be a double-check as it’s not only the rook on g1 delivering a check, but also the bishop on h3.

2.Kxg1and the king is in a mating net with no possible squares to move to in this position.

You can see more about tactical motifs here, in Chess Tactics Galore.

Puzzles are a great way of learning chess, as they are already pre-made positions. The majority of these positions will arise in your chess games and, by studying puzzles, it will be easy to identify them in your own games.

With tactical motifsthe key is to learn other tactics and how they occur to make it easier to also spot positions that will lead to those specific positions.