I got to play this game online via TTS with the designers. I had not heard about it prior to my playtest but after playing I was surprised that I hadn’t. I had a wonderful evening with these great hosts and their light worker placement game, Holotype.

Holotypeis a light-strategy, worker placement game for 2-5 players. In the game, players further the field of Paleontology by collecting fossils, research, and publishing their scientific journals. It’s a fast-paced and easy-to-learn game that still has enough options to keep even the most strategic board gamers engaged.


Disclaimer: The publisher provided the prototype digital access to Holotype via TTS. The opinions expressed in the review are completely my own. 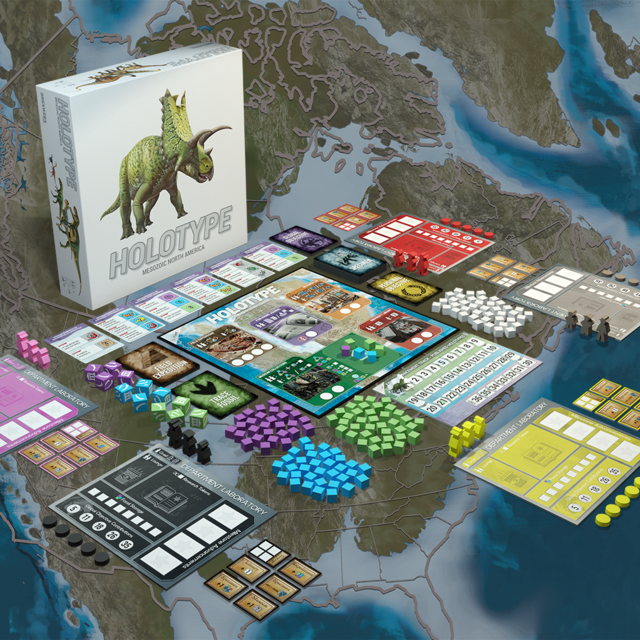 I played a Tabletop Simulator MOD for the game so did not get to feel the physical components, but the digital representation was impressive, and I can safely assume the physical pieces would be the same. I was a fan of the overall look and was eager to play when I “sat at the table”. It had good table presence.

This was a toss-up for me. I thoroughly enjoyed their worker placement mechanic that had no real set “rounds” but rather a bump and recall system. This way play felt more live action/simultaneous even though it was still turn-based. It helped me get more in character that each team could go about their tasks and objectives independently (while still competing for the same spaces). I also loved the abundance of unique species and classifications. The massive effort put in for this part was both noticed and appreciated.

This is out of character for me, but I didn’t have anything that jumped out at me as a least favorite. I would have liked the option to get another secret objective and felt the “Museum Collections” space may benefit from a tweak as I didn’t find I needed that space at all. I believe I only went there once but I think that depends on other cards and actions you luck into. That’s about it, and I wouldn’t even call that a complaint. 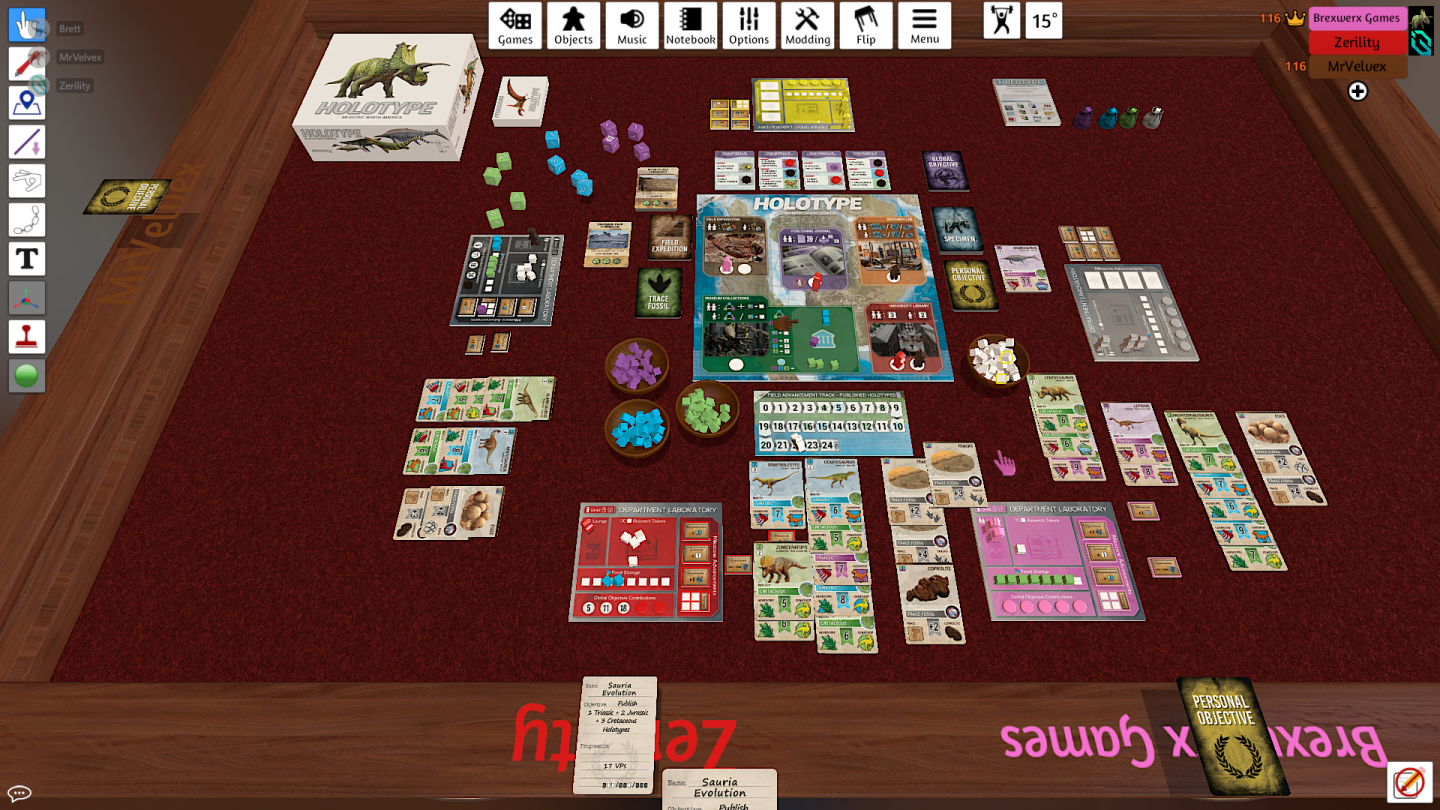 All considered, this game was an easy teach, very accessible, beautifully themed, an easy game length to digest and was clear on what you could and couldn’t do.

– I noticed the group objectives were usually cashed in by the next player to the one that achieved them as you had to take an action to claim it. This is possibly a catch-up mechanic but at times made you not want to do a beneficial action because it would unlock something for the next person. I didn’t find it bothered me and would self-balance, but some may not love that.
— As mentioned, perhaps the Museum Collections could use another look. How it resets and/or adds or doesn’t have your color when rolling a museum may not be exactly on point. Again, I didn’t mind this.
– Would like the ability to gain new or exchange secret goals or maybe get to choose from one extra at the start (3 instead of 2)
– I don’t think this game needs to be 14+, perhaps 12+, or even 10+.

I am confident this game would be welcomed in most any game collection. It checks a lot of boxes for enthusiasts and could be a great gateway game to persuade hesitant friends/family to give the hobby a chance. I have other strategies I’d like to try out and would 100% play it again if given the chance. To say it plain and simple, I really liked this game. 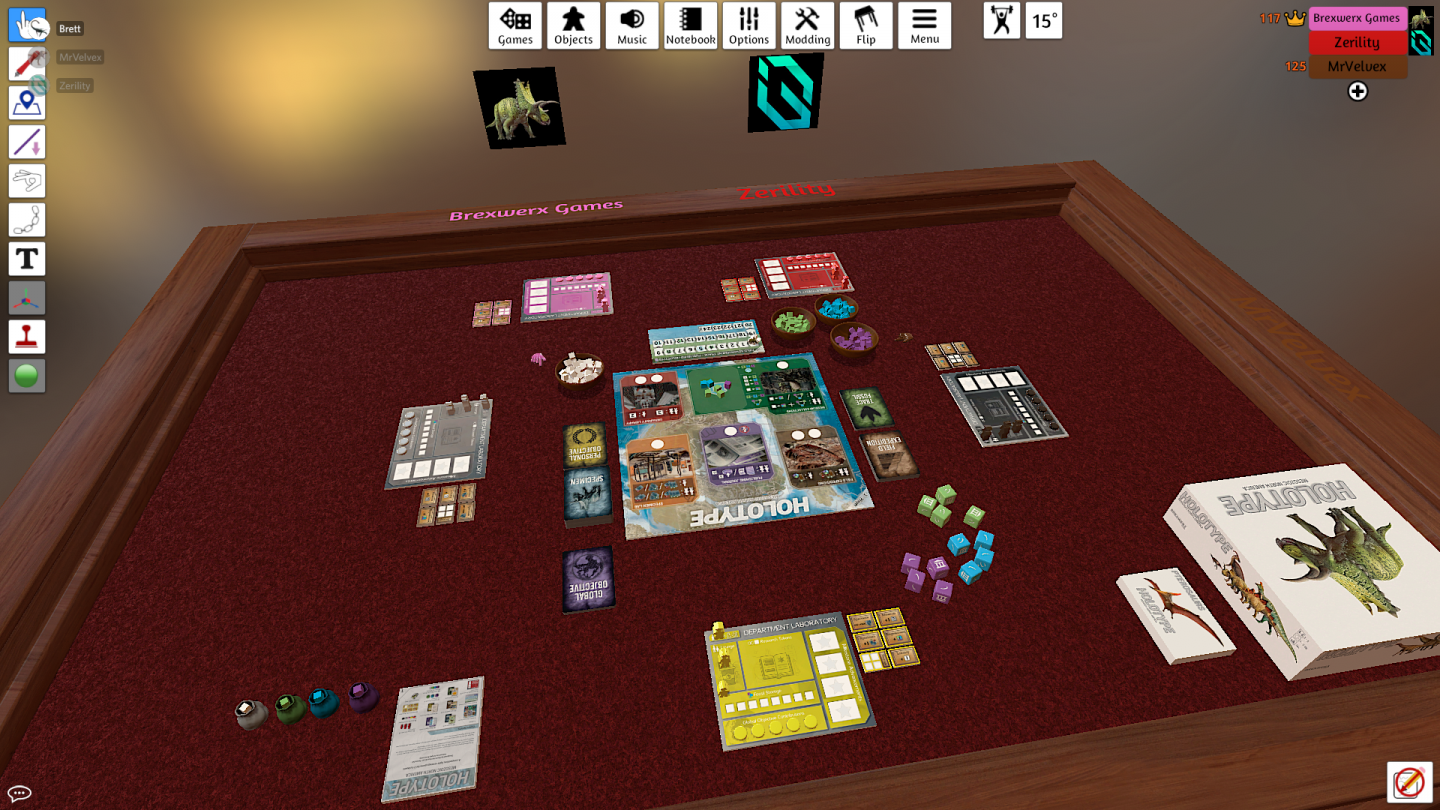 After reading Brad’s review, if this sounds like a game for you at the time of this posting Holotype will be live on KICKSTARTER until Sat, May 7 2022 10:00 PM PDT, and has surpassed its funding goal of $24,800. check it out and back it HERE.
Find out more at BGG.

Check out Holotype and Breakwerx Games on: