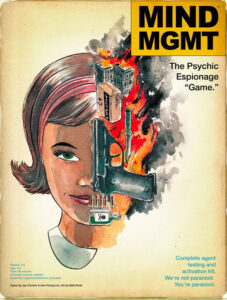 What would the James Bond movies be like if 007 had psychic powers? We may never know, but what can have the next best thing. Mind MGMT is a secret agency that uses psychically-powered agents to stop global crises. However, the agency has gone corrupt and a team of rogue agents must band together to stop the organization they once worked for.

That’s the loose plot of the 1 vs Many board game Mind MGMT from Off The Page Games. In this hidden movement game, one player takes on the role of the recruiter, while the other players must try to capture him before time runs out.

There are two ways to play Mind MGMT: A learning game and the full game. They are both somewhat similar, but the learning game leaves out a few things to give players the basics of the gameplay.

To start the full game, the recruiter secretly chooses one of the 42 spaces on the game grid to be their starting location. They then secretly move 4 more spaces. If they pass through any spaces containing one of the icons on their three cards, they collect a recruit. All of their movements will be tracked on a mini-sheet behind their player screen.

On a recruiter’s turn, they must take an action, which is usually just moving 1 space (which can’t be to a space they’ve already been to). They mark it on their secret map and collect any recruit tokens if allowed. They also have 4 immortal standees and can move one of them. If they ever have 2 immortals on an icon matching one of the two immortal recruiting cards, they can claim a recruit for that icon. The card is then discarded and another is revealed.

The rogue agents have a bit more options on their turn. Each turn, an agent can move and take an action (and optionally use their special ability). Their main actions are:

Round go back and forth like this until either the recruiter has collected all of the recruit tokens, the time token has advanced to the end of the track (both of those are recruiter wins), or the recruiter is captured.

If the above makes you feel like there is a lot going on with this game, you are not wrong. For a hidden movement game, Mind MGMT has a lot of layers (kind of like an onion). This isn’t a simple game of hide and seek like many others in the genre. Mind MGMT is going to require focus and some deduction skills from the rogue agents. That’s because there are quite a few wrinkles to the game that I didn’t even touch on above.

For example, the recruiter has a slip token that allows them to break their movement rules. If they feel the agents are closing it, spending this will allow them to jump two spaces to a new spot on the board. However, they also have to reveal that they’ve used the token. But more frustrating for the agents are the Immortals. Any space they are on will block the agents from asking about those icons. And not just on that space, but anywhere on the board. So the recruiter will have 4 standees that not only help them collect recruits but hamper the agent’s progress.

For our plays, it felt like the agents had a bit harder of a go than the recruiter. That could either be our inexperience or maybe be because this game requires more deduction then you’d expect. Thanks to things like the slip token and the 2 statue spaces (that allow for diagonal movement) it can be hard to close in a net on the recruiter.

However, not all are lost for the agents as there are ways to improve their position (other than just learning more strategy). This is due to the “Shift” system. Mind MGMT comes with 14 sealed boxes, 7 for each side. When a side loses the game, they get to open a box that will provide them with more player options for future games. I’ll spare the spoilers for those not wanting them, but I really liked this system. It helps not only add variety to the gameplay but also gives a small boost to the side that seems to be struggling. To be honest, these added card packs help elevate the game from a pretty good one to a great one.

While Mind MGMT is a pretty great game, one thing that I didn’t love about the game is that the recruiters turns feel a tad less interesting than the agents. It felt like the agents would spend a lot of time thinking and discussing options on their turn, and then the recruiter would take 5 seconds to move and it would be back to the agents. There was a decent amount of downtime as the recruiter where you are just watching and waiting (or fiddling on your phone).

Finally, I want to touch on the artwork and design of the game. The graphic designer did a pretty amazing job of working the theme into the components. The artwork is all inspired by the comic book series the game is pulled from and there are a ton of thematic touches all over the place. There are even secret messages coded into different areas that can be read with the little decoder ring. While the layout does teater across the “too busy” line at times, overall I enjoyed it.

For fans of hidden movement games, Mind MGMT is a must-own. It takes the genre in new directions that I think fans will enjoy. And thanks to the Shift system, the game only gets better with more plays. While this is by no means a simple game, both to learn and to win, it will definitely reward players who dive into it.

For player counts, I think Mind MGMT plays best with two players. The rogue agents have their work cut out for them, so winning will either require luck or a concentrated effort to deduce where the recruiter is. This could also make the game prone to quarterbacking. But at 2 players, it’s 1 vs 1, which feels like the perfect fit for this game. For those wanting more players though, there is a digital app released that turns the game into a coop one. Right now, you can only play the training game with the app, but the publisher says that the full game is coming soon.

Final score: 4 Stars – A great hidden movement game that will certainly burn the brains of the agents, but offers a lot of depth as well.

Misses:
• Recruiter player will have some downtime
• No full game mode for the app (yet).