Chess is a mental game, which means you have to think before actually playing a move ―hopefully, the best move!

In most cases, chess players get stuck in a certain position, not knowing the best move to play next and how it will impact the position.

This question can arise at any stage of the game (opening, middlegame, and endgame). For that reason, you need to study our guides, such as How to Play the Middlegame (The Ultimate Beginner’s Guide).

Next Best Chess Move to Play

In this article, we will look at multiple different chess positions which can seem a bit complicated, and we will find the best move.

We will possibly try to clarify them, so that when similar positions arise, it will be easier to solve them.

The problems and solutions will not only focus on any specific group of chess players, but rather they will be a mixture compensating for players from beginners to professionals.

Black has just played 1…hxg6 and, in this position, White is expected to immediately recapture the pawn.

But this doesn’t always have to be the case as White can play what’s called an intermezzo or an in-between move.

If White had played 2.hxg6then the position would have been a draw as the black rook would play on the 8th rank, preventing the pawn from ever fight.

In the video lesson below, GM Igor Smirnov presents to you the 5 best chess opening traps in the Queen’s Gambit, which follows the move order 1.d4 d5 2.c4. 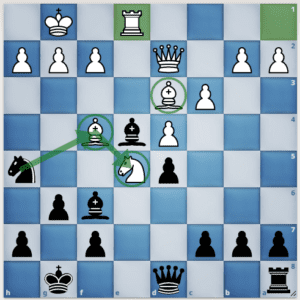 Here White played 1.Re1 with the mentality that they have an advantage since they are a pawn up.

The only problem is all the minor pieces are connected and they are all attacked.

So, the key continuation for Black is to eliminate defenders and a piece will fall after the exchange.

Or alternatively, it might go as follows: 1…Nxf4 2.Bxe4 Bxe5 3.dxe5 Qg5. In this position, there is nothing White can do besides to move the queen and lose the bishop, as Nh3+ would be a devastating open attack. 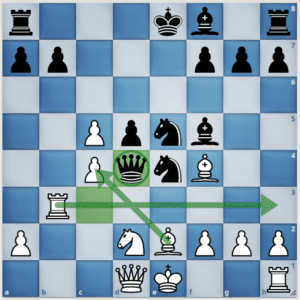 In this position, Black decides to be greedy by thinking that they can capture yet another pawn with the queen, hence they played it to d4 instead of evading to a5.

This move finds the queen end up in a trap as after 2.Be3, it has no squares to evade, leaving Black with only two options; the first being: 2.Be3 Qxd2+ 3.Bxd2 Bxc5and the queen left with a bit of positional compensation for Black.

The second option would be to rescue the queen and lose some material Instead, with the following continuation: 2.Be3 Nd3+ 3.Rxd3 Qf6. This gives White a piece and some positional advantage. 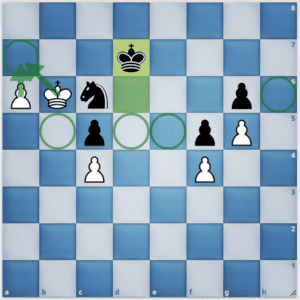 In the position above, Black had the mentality that having the knight would guarantee a win.

Instead, the knight will be lost after 2.a7 Nxa7 to prevent the pawn from crowning.

This leaves White in a winning position due to opposition and the black king has no way to go around to attack the white pawns.

Black had a drawing opportunity if they had played 1…Na7 as this would mean that White had to play 2. Kxa7 Kc7with Black only poised into playing Kc7 and Kc8.

White will be forced to either draw via repetition or by stellating their king on a8. 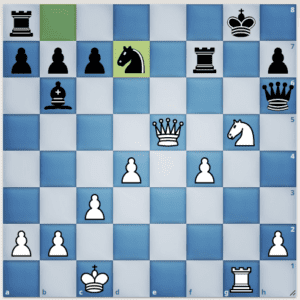 In this position, Black made the critical error of not paying attention to the multiple threats that surrounds the king.

1…Nd7 is a move that’s initially meant to scare the queen away and create some breathing space for the black king also as a developmental move for both the knight and the rook on a8.

But, in actual fact, it just leads to checkmate in two after 2.Qh8+forcing the king to play 2…Kxh8 then 3.Nxf7#.

Instead of 1…Nd7Black could have played Qg6 instead just to ensure that the king won’t have any major threats from the rook on g1. 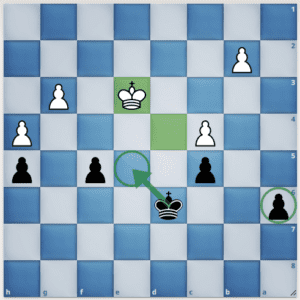 In this position, Black has opposition, but it doesn’t have that much of an effect without the a6-pawnwhich is the key to actually earning a win.

The continuation will find the following moves on the board: 1…Ke5 2.Kf3 a5.

The 2…a5 move is a waiting move that asks White to create a weakness in their position.

Black will just crown before White and, with the extra pawn, there is no way to stop them from winning.

White could have drawn This position if they had played 1.Kd3as they would be the ones dictating what happens in the position.

If Black plays 1…Ke5then White will just close down the position by playing 2.Ke3and there is no way forward.

There are many easy endgames that chess players mess up. You can learn on this lesson very important concepts, ideas and principles for playing the endgame. 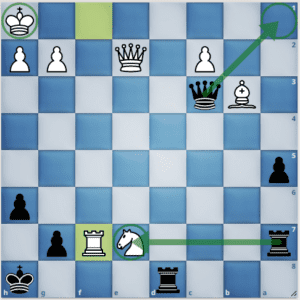 White has the impression that they have a strong attacking structure, but this is actually the main catalyst for their downfall as they forgot to make sure that their king is safe.

In this position, Black takes advantage of the back rank by playing 1… Qa1+leaving White with only two methods to respond to this check.

In both variations, White is basically losing the knight and probably the whole game.

Instead of 1.Rxf7White could have played 1.Bxf7 instead, which would have left the attack intact and also the king safe. 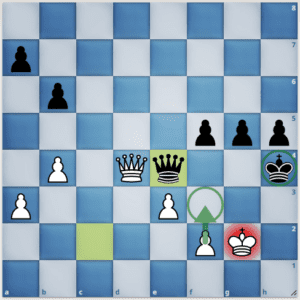 Black decides to respond to block a check by delivering a check of their own with the product that White will exchange queens immediately.

Instead, White decides to play 2.f3leaving Black’s queen with no squares to move to, thus forcing Black to play 2…Qxd4.

This will just end up as a loss as there is no way that Black can stop the pawn from fight.

The variation will continue as follows: 3.exd4 g4 4.f4. This leaves the black king with no faster method to catch the d4-pawn.

Instead of blocking with the queen, Black could have played 1…f4 and it would have been a position drawn.

The major problem is when players are a pawn up or material up, they tend to think that they are winning the game, thus making them become greedy which leads to blunders.

Blunders are shortcuts to lose chess games. That’s why you need to learn 10 Useful Tips to Avoid Blunders in Chess. 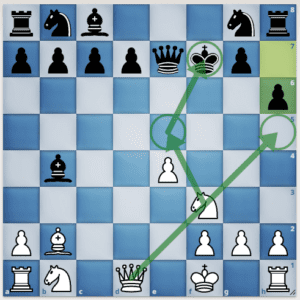 In a position where both players don’t have the ability to castle, Black just plays a bad move when it comes to 1…h5 with the impression that the king will play to g6then h7 and it will be safe.

What the move actually does is it gives White an attacking chance and a chance to gain some material.

The game will go as follows: 2.Ne5+and Black is forced to play 2…Ke8 as any other legal squares will result in the king and queen getting into a fork or a checkmate.

3.Qh5+ Kd8 4.Nf7+ Ke8 5.Nxh8+and Black has to do nothing besides to dance with the king until White decides otherwise.

The major problem that Black had in this position was to create weaknesses in the light squares.

The best option for Black would have been to play 1…Nc6. It’s a developmental move that will prevent White from playing 2.Ne5+. 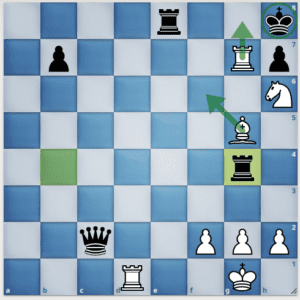 Black has the impression that everything is now okay since they have captured the queen.

All in all, it’s just the opposite as they are stuck in a smothered checkmate position.

And the question is what if 3…R8g7 is played instead… Well, it becomes a back rank checkmate after 4.Rd8#

The major problem Black made was to allow so many of White’s pieces to surround the king while they still had two rooks and a queen in the game. 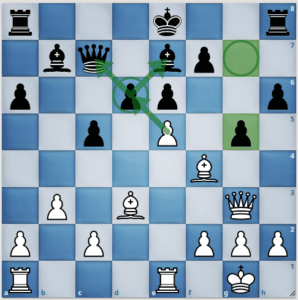 In this position, Black has the impression that their attack is more significant as compared to White’s attack and will cause more damage.

But, in actual reality, the move 1…g5 is just further damaging Black’s position as White will just play 2.exd6.

This move forks both Black’s bishop and queen. If Black decides to play 2…gxf4then White will play 3. Qg7and now three pieces are simultaneously attacked, meaning Black will lose a rook.

Instead of 1…g5Black could have played 1…0-0-0activating the queenside rook, and also protecting the d6 pawn. 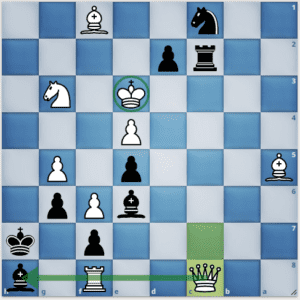 This is a clumsy position from both sides, with both of them having multiple threats.

Black has only one way to win and the main idea is to identify the mating net that’s around the white king and how to manipulate it.

It’s very rare to see a chess player promoting anything else that’s not the queen, but that’s what’s needed for Black to make the best move and win.

Sometimes underestimated, knights are amazing chess pieces which in certain positions can deliver surprising checkmates. As an example, watch here an impossible checkmate with a knight.

What all the problems above have in common is that while there is a good move always available, that means there is a better move also in the positions.

The key is to always look at what piece is capable of doing something and which pieces can cooperating with each other for a better solution.

Most of the problems above will arise in some of your games, while the positions might not be the same; you will have to implicate the solutions to gain some advantage.

Training in finding not just a good move but the best one is something that will make you a better chess player!