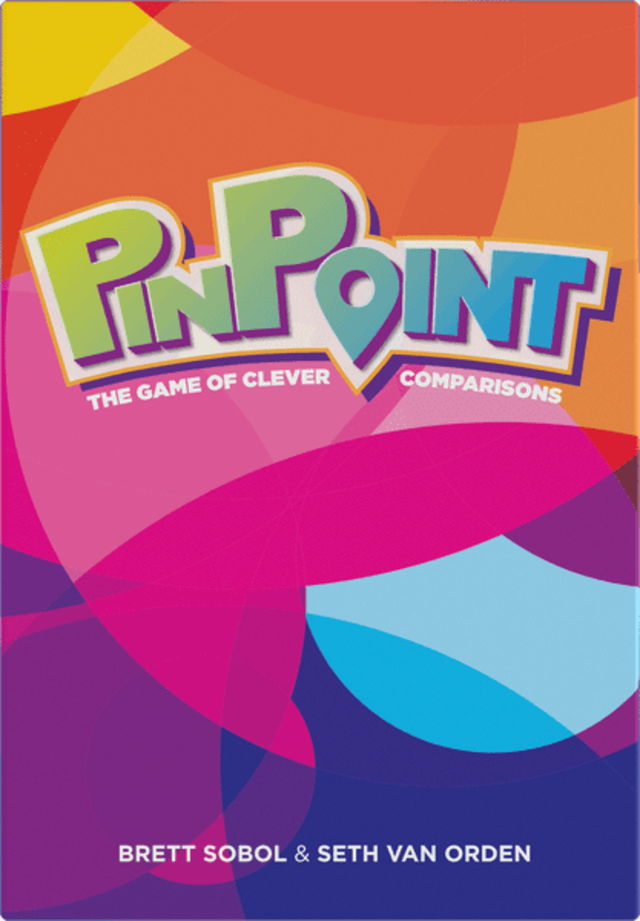 PinPoint is a 3-in-1 party game in which you must make clever use of comparisons in order to win. Here are the three ways to play:

Disclaimer: The publisher provided the prototype copy of PinPoint. The opinions expressed in the review are completely my own.

This game was really fun! There are 3 different game modes in the box, and when polled afterward, our playtest group was about evenly split on which of the 3 was the player’s favorite.

The 3 modes play as follows:

1-100 the active player gets a randomly assigned spectrum from 1-100 that represents some concept like short to long or old to new. Then the clue giver gets a randomly assigned number like say 28 and has to give a clue without numbers or specific words to get others to guess as close to that number as possible. An example was my brother in law who rolled up the short to long scale and gave “house” as the clue to get people to try to guess 24 in his mind a house was longer than a number of things but much shorter than most really long things. Surprisingly enough it got a decent number of numbers within 10 which is how close you have to be to score. There are bonuses for matching the number or getting closest. Whoever has most points at the end wins.

1-10 is a different game where teams choose their own character range. We saw ranges like “on a scare from Oscar the Grouch to Eregorn” or “on a scale of Harry Potter to Gandalf” OR from “The Tabernacle Choir to Evil Kneevil” it lead to some very interesting comparisons like how Beethoven is being a CEO on a scale from Beethoven to Jackie Chan. It was delightfully ridiculous and there is even a point chart so that you can see that your low points are much more expected than you might think :).

Least and Most has a Dixit style range of 6 cards that everyone votes on, however you aren’t choosing them. So you will be voting on whether Vader, Florence Nightengale, Grogu, or Ghandi are most or least likely to …say please or thank you, or maybe pick their nose in public, etc. The more votes that you match each round with other voters the more points you get.

We loved all 3 games and they play very differently! They are really replayable by shifting teams or scales. It plays quickly and is super family friendly. The games are hard and require abstract thinking without turning general players away. We would gladly stock this game in our store and I will be happy to play it every time it is requested. Our only problems with it are that the instructions are not necessarily the most intuitive. We made it there eventually but for how simple the game is to actually play (Simple is not easy in this case) it took too long to puzzle through the rules as written, but even with that it was worth the puzzlement. Each of these games is a solid 7/10 with people that love that game getting 9/10 worth of enjoyment from it. That comes from a diverse playgroup with all different ages and abilities. The fact that the 3 are materially different enough to appeal to different people and all 3 come in the box makes this a solid 9.5/10 on my scale of games worth picking up to play with anyone, from intro gamers to serious gamers.

After reading The Arcanist’s Armory LLC’s review, if this sounds like a game for you at the time of this posting PinPoint is now available for purchase on nauvoogames.com. Check it out and get it HERE.
Find out more at BGG.

Did you buy it based on our review? Please comment below letting us know!

Check out PinPoint and Nauvoo Games on:

The Arcanist’s Armory LLC has recently begun to review board games. They love supporting small creators as they also run several custom dice and game projects and empathize well with other small creators. Sharik Peck, the owner, has a master’s degree in Financial Economics and a JD (law degree). He works as an attorney full time and runs the gamestore on the side. They specialize in family friendly games and their reviews will make sure to give suggestions for how to play the games with your families.

All of their reviews can be found HERE.