Note in Digital these may differ/ Below Stats for actual Board Game according to BGG:

In the 2400s, mankind begins to terraform the planet Mars. Giant corporations, sponsored by the World Government on Earth, initiate huge projects to raise the temperature, the oxygen level, and the ocean coverage until the environment is habitable. In Terraforming Marsyou play one of those corporations and work together in the terraforming process, but compete for obtaining victory points that are awarded not only for your contribution to the terraforming, but also for advancing human infrastructure throughout the solar system, and doing other commendable things.

The players acquire unique project cards (from over two hundred different ones) by buying them to their hand. The projects (cards) can represent anything from introducing plant life or animals, hurling asteroids at the surface, building cities, to mining the moons of Jupiter and establishing greenhouse gas industries to heat up the atmosphere. The cards can give you immediate bonuses, as well as increasing your production of different resources. Many cards also have requirements and they become playable when the temperature, oxygen, or ocean coverage increases enough. Buying cards is costly, so there is a balance between buying cards (3 megacredits per card) and actually playing them (which can cost anything between 0 to 41 megacredits, depending on the project). Standard Projects are always available to complement your cards.

Your basic income, as well as your basic score, is based on your Terraform Rating (starting at 20), which increases every time you raise one of the three global parameters. However, your income is complemented with your production, and you also get VPs from many other sources.

Each player keeps track of their production and resources on their player boards, and the game uses six types of resources: MegaCredits, Steel, Titanium, Plants, Energy, and Heat. On the game board, you compete for the best places for your city tiles, ocean tiles, and greenery tiles. You also compete for different Milestones and Awards worth many VPs. Each round is called a generation (guess why) and consists of the following phases:

1) Player order shifts clockwise.
2) Research phase: All players buy cards from four privately drawn.
3) Action phase: Players take turns doing 1-2 actions from these options: Playing a card, claiming a Milestone, funding an award, using a Standard project, converting plant into greenery tiles (and raising oxygen), converting heat into a temperature raise, and using the action of a card in play. The turn continues around the table (sometimes several laps) until all players have passed.
4) Production phase: Players get resources according to their terraform rating and production parameters.

When the three global parameters (temperature, oxygen, ocean) have all reached their goal, the terraforming is complete, and the game ends after that generation. Count your Terraform Rating and other VPs to determine the winning corporation!

Disclaimer: The publisher provided the Steam Digital copy of TERRAFORMING MARS.. The opinions expressed in the review are completely my own.

The need to ensure the longevity of the planet, protecting the water shed and oceans, keeping breathable air clean, and ensuring we HEAT up this rock as much as possible…

The board game is one of the select few that sees action on a regular basis in our household. We have all the MUST HAVE expansions including The Hellas & Elysium expansion board. Given the many nights away from home on business or even vacation, I had to get a copy online and add it to my STEAM library for ease of access. No climbing a rolling ladder along the shelves of dusty books (or in my case unplayed prototype games) just a click of a mouse to log in and access a family favorite for the awesome challenge that awaits anyone seeking the SOLO mission option, battling with online or local friends, or the unfriendly AI skirmishes. 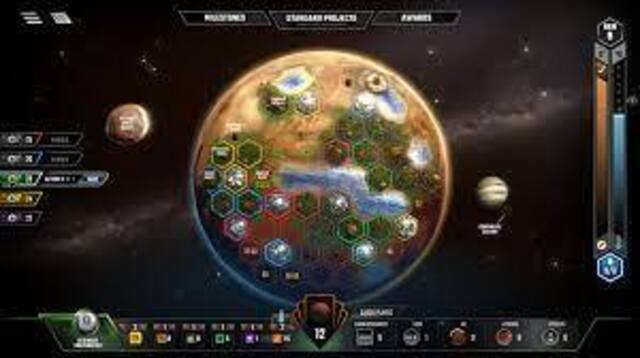 I am taking this review on, NOT from a new player to the game point of view, but a way to expand the joy of terraforming yet another successful Mars plant while somewhere on this planet away from the gaming table. If you have not played Terraforming Mars, you should invest the time and money in purchasing the board game first before continuing on. We will reference the board game as we review the value of turning a beautifully designed board game into a digital delight. This is not about the mechanics of the game…

As in most all digital versions of games, if you already know how to play the game, the quick and immediate set up does give that special feeling that you can maximize your game play time vs the 5-10 minute setup of the physical game even with a well organized box.

Upon starting out, I have to admit that it takes some adjustment when scanning cards for their attributes given any eye sight on a standard monitor who does not live with the luxury of 20/20 vision. (Or maybe it is the comprehension level of the reviewer – that of a Squirrel!) This is always a challenge and continues on with this game given the card heavy reading that must take place. This is true unless you have played so much that just the sight of the photo on the card triggers the context, play action, and strategy all in one terra-moment.

The digital version is a layer of complexity when competing. I noticed that if you are the kind of min/max player that can actually keep track of the stats and strategy of your opponent, this will feel a little like having blinders on during each session.

As far as the esthetics go, the sound fX are nice but not needed…. The real value is the music. This orchestrated piece of brilliance is SPA like and I think they may be sending subliminal instructions on how to stop smoking, over-eating, or just plain reduce anxiety. (This game may be a better solution than the CALM App! – Don’t take my advice, consult your doctor or therapist on that one) All I know is the music gave me a restful feel as I played through each round. A rare pleasantry. Bottom line, go to settings, turn up the music, turn down the SFX. The opposite from usual video game play these days.

Graphically it delivers as solid replication of the board game WITHOUT adding too much animation or unneeded cut scenes found with other titles turned digital. Which brings us to the most recent expansion additions the Steam experience: The Hellas & Elysium expansion board is absolutely flawless in design and I found no errors or bugs as I explored through a number of games on each landscape of Mars. The somewhat odd feeling you get when you pull a card meant for the original board that now must be nerfed or modified to fit the new map still remains, however some what less intrusive remember given the game provides the automated alternatives that you might not or have to look up to keep the game moving. They were prepared for this and deliver a nice bridge to this sometimes awkward moment on the physical play table.

IF YOU MISS OUT ON THE ABOVE SALE, BE ON THE LOOKOUT FOR YOUR CHANCE TO WIN Terraforming mars later this week!