The Bishop’s Opening can give you a great opportunity to shake things up and get out of automatic developing moves without taking unnecessary risks.

Given that 2.Nf3 is a far more common move, at the beginner-intermediate level, Black is often taken immediately out of their prep. While it lacks the advantage of attacking Black’s e-pawn, it hits right at Black’s weak f7 square.

2.Bc4 is a pretty non-committal move, but a solid developing one. As such, the Bishop’s opening allows for the transposition into many mainstream openings, such as the Italian and the Two Knights Defense.

One more advantage of 2.Bc4 is that it avoids the Petroff (something I personally facing hate) and its derivations such as the Stafford Gambit.

Now let’s find out how to play the Bishop’s Opening!

The Bishop’s Opening is an ancient opening; one that goes way back to the 18th century and the days of Romantic chess. It was preferred by François-André Danican Philidor (for whom the Philidor Defense is named) to 2.Nf3.

In those days, the Bishop’s Opening was considered a highly theoretical opening with very complex variations, which had more to do with the strategic and tactical concepts of the day; not so relevant to the modern understanding of the game, but interesting historically speaking!

That said, over the last couple decades, it’s popularity has resurged, much like the Italian. If you’re a beginner to the game, the Italian Game is great for your first opening repertoire, check out our recommended 10 Chess Openings for Beginners.

Main lines of the Bishop’s Opening 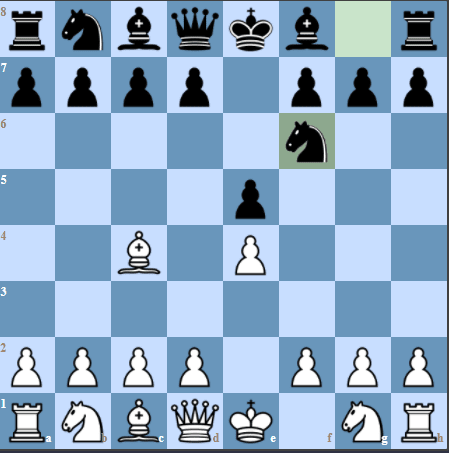 The reason 2.Nf3 is the most popular move after 1.e4 e5 is because not only does it develop the knight to an optimal square, but it has the double advantage of attacking Black’s e-pawn, meaning Black must reply with a defense ( usually 2…Nc6).

2.Bc4 is a solid developing move and puts pressure on the f7 square, but nothing is immediately attacked that needs to be defended, so Black’s most natural (and common) reply is 2…Nf6, attacking White’s e-pawn.

Naturally, this pawn needs defending, but no need for White to panic. It’s all part of the plan.

3.d3 Is the most common response. And why not? It’s a natural developing move. The e-pawn is defended, and White’s dark-squared bishop may now be defended. Nice.

From here, 3…Nc6 is most common, and if 4.Nf3 we’ve got an Italian game on our hands. Another option for Black is 3…c6, which prepares a strike at the center and on White’s bishop with …d5. 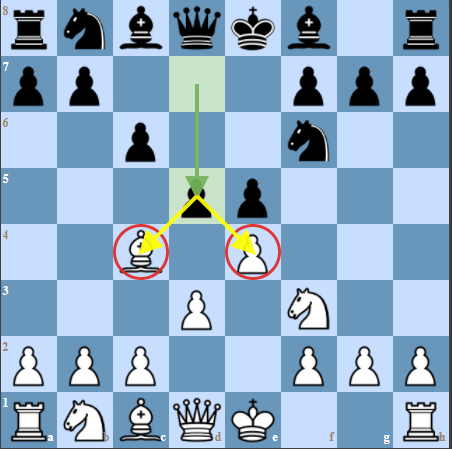 A more aggressive response to the Berlin Defense for White is 3.d4, the Ponziani Gambit. Here White makes their own immediate strike at the center.

White will play 4.Nf3, giving up the central pawn for rapid development.

An attempt by White to recover the pawn immediately with 4.Qxd4 gives Black a slight advantage as after, 4…Bb4+ 5.c3 Nc6 6.Qd3 Ne5 7.Qe2 Bc5, Black has three minor pieces developed (compared to White’s one) and has chased White’s queen all over the board. 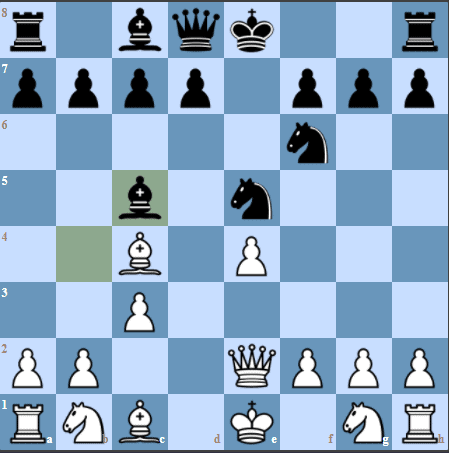 However, if Black takes the e-pawn with their knight, the advantage goes to White, as after 4.dxe5 c6 5. Qe2, the knight is forced to c5, it’s only safe square as the e-pawn controls d6 and f6. Not only that, but Black’s will have a real hard time developing with the pawn on e5. Their dark-squared bishop cannot be easily freed and basically has to be developed (quite passively) on e7. 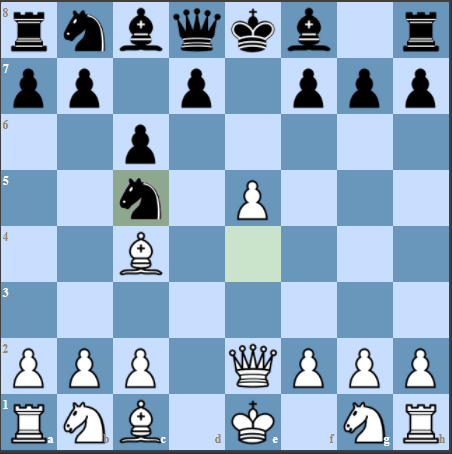 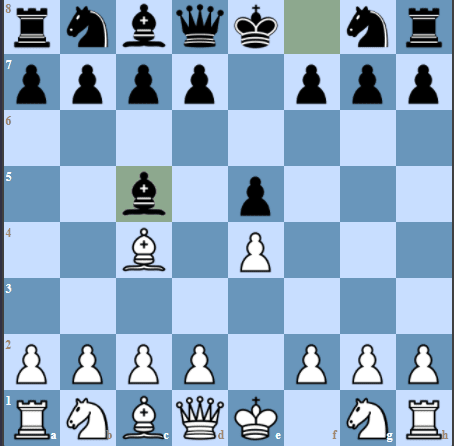 In the Boi Variation, Black mirrors White’s bishop. White cannot make an immediate thrust at the center with d4 as the d4 square is defended twice by Black.

The two most common ways for White to respond in transpositions. 3.Nf3 Nc6, while 3.Nc3 gives us something akin to a Vienna Game.

Maybe you’ve read up to here and thought, “I want to play the Bishop’s Opening to not play mainline openings” Well then, you could always try the Wing Gambit. 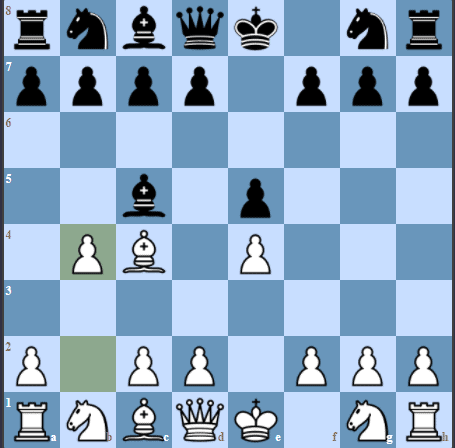 The main idea is to offer Black a pawn, but by doing so deflects the Black bishop from the a7-g1 diagonal. If Black takes the pawn, White gets more control over the d4 square and the Bishop is no longer targeting White’s vulnerable f2 square.

The Wing Gambit in the Bishop’s opening is rarely played at the top level. That said, though a pawn up, the advantage given to Black by engines is minimal (-0.2).

The Bishop’s opening has some really cool traps you can try out (and that you should be aware of). Since you’ll usually be taking your opponent out of prep, they might not be as prepared for them as they would in more common openings. 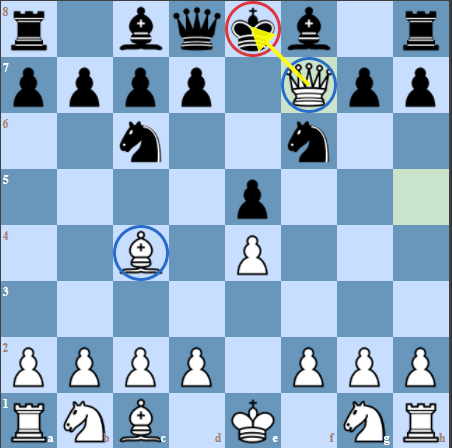 Yes, but Black has to mind White’s threats. 3…g6 and 2…Nf3 both parry this checkmate.

Since the Bishop’s Opening is likely to transpose to the Italian Game, beginners should also be aware of the Fried Liver Attack. You can read Chessable’s blog article on this nasty attack here.

A trap for Black

Whoa, looks good for White, right? Hitting the f7 square with the knight and the bishop! 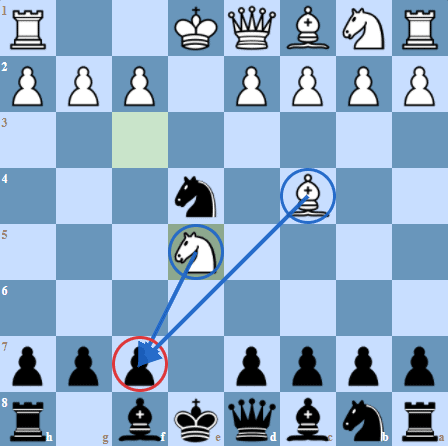 Meh, it’s not really that big of a deal. Black can counterattack the bishop with 4…d5. After the Bishop moves away, Black can go …Qg5 hitting White’s undefended knight and g2 pawn.

Black can scoop up the knight, but White has 5.d3, and the queen can be pinned with 6.Re1.

Black ignores this threat and creates another threat with 7…Bd6, threatening mate in one. After 8.g3 Ng5, the temptation to play 9.Re1 pinning the queen is just not enough. 9…Nf3+ 10.Qxf3 Qxf1+ and Black wins the bishop on c1 with eyes on the pawn on b2 and the rook stuck on a1. 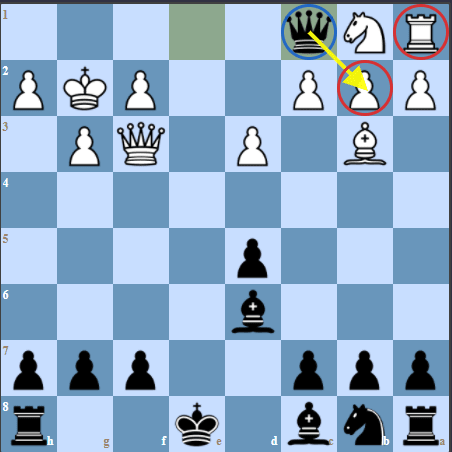 The material advantage for Black is simply too much for White to handle.

A trap for White

This cool trap we’re about to look at is quite handy as even if Black does not fall for it, it is a solid position that doesn’t take too many risks.

White then goes 5.f4, which can break open the kingside for an attack or really close things down with f5. It looks like Black has a winning tactic though with 5…Ng4, and it appears White has exposed themself too much. 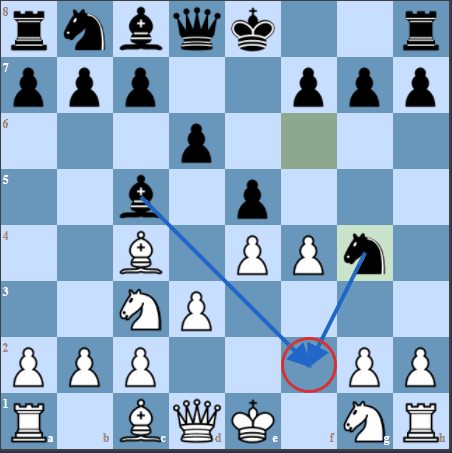 White ignores this and plays 6.f5, Black enters with 6…Nf2 and forks the queen and rook, but the queen slides out with 7.Qh5 and threatens mate in one. 7…0-0, mate in one avoided. After 8.Bg5 attacking Black’s queen, note that the f-pawn cannot block because White’s bishop on c4 pins it!

8…Qe8, the queen must move. 9.Nd5 brings another piece into the attack, and threatens a fork of the rook and queen with Nxc7.

Now if Black finally goes 9…Nxh1, going after material they were after a few moves ago, 10.Nf6+ gxf6 11.Bxf6 and you can see the mate to follow for White. 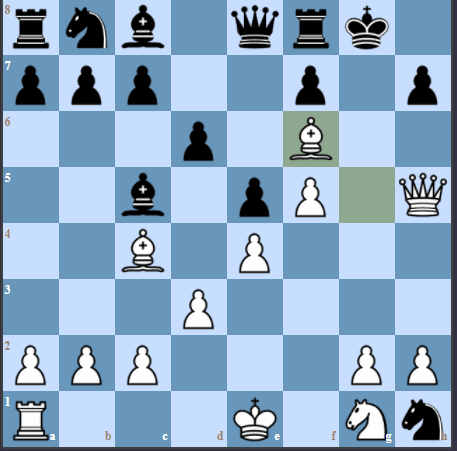 From here it is a forced mate in four!

What is the bishop opening called?

The bishop opening is called just that, the Bishop’s Opening, due to the fact that the Bishop is the first piece developed by White on move two.

How good is the bishop’s opening?

The Bishop’s Opening is a perfectly solid opening. It develops a piece from the outset and helps to control the center, in line with opening principles. That said, it is not nearly as popular at the top level, and ranks far behind more popular openings such as the Ruy Lopez, the Italian Game, etc.

What do you play against the bishop’s opening?

What is a bishop’s pawn?

A bishop’s pawn is the pawn located directly in front of the bishop, ie on the c or f file. This is true for both the white and the black pieces.