Your gaming group has just completed a lengthy and tense campaign. There were miniatures around every corner of terrain which had been laid out meticulously while another player read the block of flavor text in preparation for the next mission. Or perhaps your group just finished a dense, two-hour Euro; no minis to be found on that board, but there were lots of tiny wooden cubes, each with a value and a corresponding series of icons in the rulebook to explain them.

These experiences are stressful for different reasons, but stressful nonetheless. The members of the group need their palates cleansed. They need to sit back and enjoy a game without having to check the rulebook repeatedly. They need a game without significant negative player interaction. And, perhaps, one with a pleasant theme.

Struggling to find a game that fits those criteria? Well, Board Game Quest has you covered. Below are our picks for the best relaxing games that will give you a complete gaming experience without getting you too worked up. (And since Tokaido seems like the obvious selection for a list like this, we collectively made a pact to not pick that one. But, yes: It’s a relaxing game. Call it an honorable mention.)

Chosen by Tony
Is it a game or a puzzle? Or maybe it’s an activity, kind of like Where’s Waldo books. Well, it doesn’t really matter because MicroMacro Crime City is the perfect game when you aren’t looking for something too heavy. It’s a game where rules explanation is basically not needed. Choose a packet, read the first card, start playing. We like to spread out the map on the coffee table, sit down, and just get to it. We discuss what we are looking for, hunt around the map, and try and figure out the crime. It’s absolutely perfect for a casual winter evening in front of the fireplace while drinking a hot chocolate.

A Gentle Rain was a surprise that found its way to me. It’s a game that you play by yourself, one that encourages you to get comfortable and just play, not worrying about whether you win or lose. In many ways, it’s antithetical to what most people expect out of a game. A small-box footprint where the gameplay is laying tiles and matching, it doesn’t demand much from you. But what little is expected from you, it can give back tenfold in relaxation and rejuvenation. Put on your favorite relaxing playlist and your slippers and get zen. 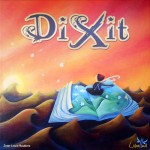 Not many games can conjure the crackle and pop of a late night campfire, with family and friends bundled up and gathered close, each listening and waiting patiently for their turn to tell a tale. Dixit’s storytelling framework asks players to extract meaning from abstraction. While others ponder how your snippet of a larger story connects to the cards on display, you get to sit back and watch their gears turn. Will they take your attempt literally, or will they key in the fact that you’re trying to throw a few of them off? When voting tokens are revealed, the truth about who knows you best starts to emerge. And it’s this element of Dixit that truly shines: the stories that are shared around this simple yet elegant narrative design illuminate how we connect with others. When you are the only one that intuits your friend’s chosen card, and with it, their sly attempt at a story, a harmony reverberates between players. It’s not quite meditative, but it’s a salve to apply either before or after other potentially more brutal affairs.

There’s a poem from Sara Teasdale, one of my all-time favorites.

Winter Stars
By Sara Teasdale
I went out at night alone;
The young blood flowing beyond the sea
Seemed to have drenched my spirit’s wings—
I bore my sorrow deeply.

But when I lifted up my head
From shadows shaken on the snow,
I saw Orion in the east
Burn steadily as long ago.

From windows in my father’s house,
Dreaming my dreams on winter nights,
I watched Orion as a girl
Above another city’s lights.

Years go, dreams go, and youth goes too,
The world’s heart breaks beneath its wars,
All things are changed, save in the east
The faithful beauty of the stars.

That summarizes the feeling I get when playing Stellar. The simple beauty of honoring the insignificance of humanity amongst the vastness of the heavens. Finding that in board gaming is rare, and it’s the main reason Stellar stays in my collection.

Having turns where you can’t do anything is stressful. Watching your opponent combo move after move playing 3D chess while you’re playing checkers is stressful. I don’t want to stress out about a bad turn when I want a relaxing experience. Meanwhile, a bad turn in Barenpark is getting a tile. Most turns, you play a tile and grab one or more tiles to use in the future. While you can glance around and see that your opponents have more enclosures or bear statues you don’t know who won until after the game is over (I almost picked PARKS for this same reason). But even if you got eaten up like a salmon leaping into a bear’s mouth, you can look at your park and feel a sense of accomplishment. That’s unlike PARKS where you just have pretty cards in front of you; you didn’t make anything. You poster collecting kleptomaniac. *takes a deep breath* We’re supposed to relax and not beat each other up for bad choices. Barenpark also doesn’t punish you for bad choices—there’s almost always a way to finish your park. You won’t win if you’re inefficient but we’re talking relaxing games; not winning games. You can opt be a stress monster and play to win at all costs or you can play to make a fun park full of bears (and monorails with the expansion) and just have a nice time with it.

For me, a relaxing game is one where I don’t need to worry too much about the rules, whether because I have them memorized or because there simply aren’t that many. Century: Golem Edition is a light resource upgrading game that plays quickly and is simple enough to not even need the rulebook after a play or two. (The “rulebook,” incidentally, is a single double-sided page, which is a phenomenon that must be seen to be believed.) You’ll play some cards to get or change resources. Maybe you’ll give up a few of these resources to get a new card or spend a bunch of them to grab the demand cards that score points. It’s all casual enough to have conversations during play and yet there are enough interesting decisions to still make it a worthwhile endeavor. Century: Spice Road is the same game, but I prefer the Golem artwork and “theme” mostly because it comes with soothing gems instead of cubes. Oh, and one of the actions you can take on your turn is resting. Resting! Talk about a relaxing experience!